New Christmas Romance: Love All of Me

CAN GIANNI AND KATE GET BEYOND THEIR PASTS TO A LOVING FUTURE? 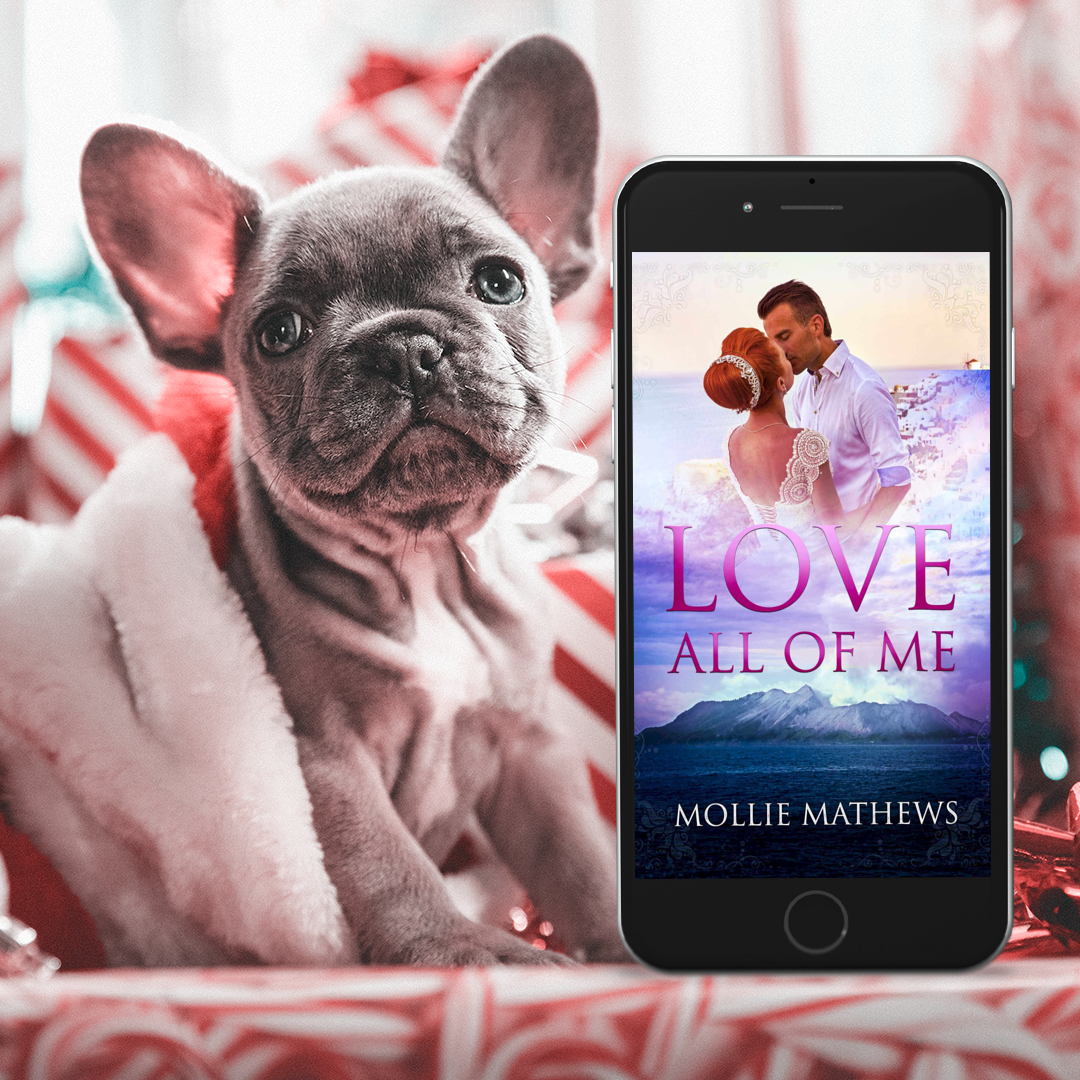 Thank you to everyone who has so enthusiastically written to me and shared how they devoured Love All of Me in one sitting. And thank you for your glowing reviews.

This story was inspired by the tragic events of December 2019 when the volcano on Whakaari, commonly known as White Island, in New Zealand erupted. At the time of writing, the eruption took the lives of 16 people and injured 30, most critically with life-threatening burns.

I read about a young man (aged only nineteen) who not only was severely burned but awoke from his induced coma to learn that his entire family had died.

I wondered, what would it be like to be a survivor? What if you felt you had no right to live, let alone love again? What if you were wracked with survivor’s guilt?  What if your scars weren’t just on the outside but buried deep within? What and who would it take to heal such traumatic scars?

As with all my love stories, there is a happily ever after.

Love All of Me is out now! Despite the background tragedy, it’s a quick, fun and joyful read, set in the dual locations of The Bay of Islands, New Zealand and the volcanic island of Stromboli, off the coast of Sicily. Perfect for a much-needed escape.

I hope you love it.

Exclusive to Amazon in ebook and paperback. Audio coming next year!

P.S. Thank you so much to my lovely team of advance readers for your honest and glowing reviews. So far 13 of the 21 reviews have gone live on Amazon. Special thanks to those of you who picked up a few pesky errors. Sometimes I’m so close to the bees I can’t see the honey.
Thank you.

Romance along with sorrow and angst

Love All of Me was a quick-paced read with a lot of angst and sorrow leading up to the happily ever after. The characters of Kate and Gianni meet and sparks seem to fly. When they are thrown together again unexpectedly – he’s Santa and she’s his elf to give out gifts to poor children – things really ratchet up a notch. The story has a lot of depth to it due to their pasts.

The story had a lot of threads woven together to add layers to the story. There were vivid descriptions of the land, his home, the volcanoes which play a major role in the story, and the bees. I loved the imagery of the bees and Gianni’s thoughts on them were interesting. There were family and friends along with Kate’s dog, romance, loving and love. The story is set in New Zealand and Italy. There is nice closure with a happily ever after. I wished the story had gone on a little longer. I love the details on the cover and how the title was voiced throughout.

Ms. Mathews is an author whose books are filled with love, some heat and great locations. I look forward to reading more of her books.

I absolutely loved this romance book set in New Zealand’s Bay of Islands. Gianni has fled to New Zealand to flee from his family and Kate is in New Zealand running her global Manuka honey empire. Kate and Gianni are realistic, strong, independent, sexy, and confident. Kate is irate when Gianni demands she sell her business to him. Kate and Gianni are struggling with personal issues and just want to escape their lives. They end up having sparks that are hotter than an inferno. Their journey with each other is sensuous and in one of the most tranquil places in the world, their happily ever after came when they were at their most vulnerable. I recommend reading this phenomenal romance that will set you on fire, this author is extraordinary and knows how to captivate her reader’s hearts and attention with passion and hot, steamy romance.

Reviewed in the United States on December 19, 2021Love All of Me is a heartwarming story of two of people who both have issues and is hiding behind them.

Kate Miller and her family went on a cruise to tour of Whakaari in the Bay of Islands in northern New Zealand which a volcano erupted and she became the sole survivor of her family. To keep her father’s memory alive, she rebuilt her father’s beekeeping business for Manuka honey. As a favor for a friend, she agrees to be Santa’s helper where she runs into a reclusive Italian-New Zealander named Gianni Romano. There is instant heat, but Kate fears it and tries to run from it but Gianni isn’t giving up.
Take a trip to the Bays of Islands in New Zealand through the eyes of Mollie Mathews to see how these two found love and happiness.

Love Conquers All… Even volcanoes! Romantic and good read.

Reviewed in the United States on December 19, 2021

Love All Of Me is a great read. It has its share of angst and joy. Kate and Gianni have a lot of familial events that play into this story. Well-layered and the interaction, even when it comes to their need for a therapist, is really cool. Disaster and betrayal are balanced out with the realization that they have both dealt with the volcanic activity which leads to love. A quick and balanced read.
Received an ARC of this book and happy to voluntarily review it … Look forward to more.

5.0 out of 5 stars Can they get beyond their pasts to a loving future?

Reviewed in the United States on December 15, 2021

I love this story from Mollie Matthews which gives another view into living by the Bay of Islands in New Zealand. Kate Miller is the sole survivor from her family of the volcanic eruption on Whakaari in the Bay of Islands in northern New Zealand. She has rebuilt her father’s beekeeping business for Manuka honey. She really runs into a reclusive Italian-New Zealander Gianni Romano. It seems there is instant heat, but the heat is more of distrust by Kate. Really, they both have issues they have been hiding that prevent moving forward. I hope you will enjoy this story of how the bees bring these two together despite serious missteps. Enjoy a break in a warmer setting!

Another heart wrenching yet heart-healing story from this gifted author…

Reviewed in the United States on December 18, 2021

I won’t detail the story which has essentially been covered in the blurb & prior reviews. What I must mention though is the push & pull between the main protagonists. They both had horrific experiences & whilst she had physical scars & grieved the loss of her family with a heavy dose of self-blame, his were buried much deeper & yet he revealed everything. Loved her almost human mutt & the detailed well-written story that had a lot of angst but underpinning all the drama, the harsh words. they were so sexually connected that they could have put the stars to shame. Highly recommended.

Kate lost all of her family when there was a volcanic eruption on Whakaari Island. She is left suffering from Survivor Guilt and her only reason to stay alive is growing her father’s honey business. Then she meets Gianni who grew up on the island of Stromboli which has a live volcano. Can Gianni help Kate get over her loss?

Excellent, you won’t put it down!

Reviewed in the United States on December 14, 2021

A fast heartwarming read. You will find yourself longing for Kate and Gianni to heal and love, and heal together. I enjoyed their story and then enjoyed it even more when I learned that the idea derived from an actual natural disaster. I refuse to give spoilers so you’ll have to read it to find out! You won’t set it down…you’ll read straight through to the end!

Reviewed in the United States on December 18, 2021

A wonderful story about loss and healing. Both Kate and Gianni have sorrows from the past that prevents them from loving someone. Their emotions are brought to life in their journey towards healing and love and makes a wonderful read. Thoroughly enjoyed it.

Gianni And Kate’s romance ran very hot and they had so much chemistry and passion flying between them that even their animosity towards one another told me of their feelings. The question to me really became can they possibly reach a compromise that can enable Kate to keep what’s holding her together?